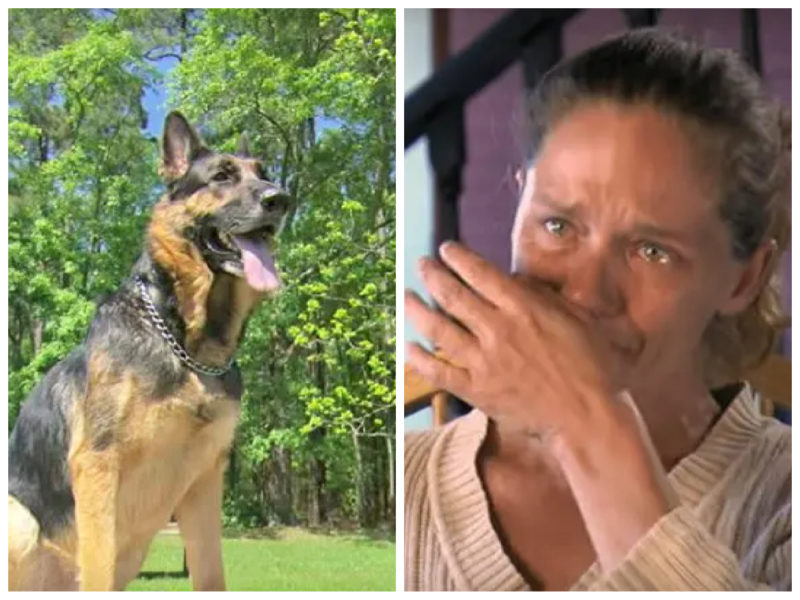 In just one day, 36-year-old Shannon Loriot from Georgia experienced more shocks than most people experience in a lifetime.

On that day, the woman quarreled with her husband and decided to take a ride in the car – to get some air, calm her nerves and put her thoughts in order.

The woman accelerated quite strongly and lost control at the next turn. The car flew into a ditch, and Shannon herself was thrown through the rear window directly onto the trunk. Shannon lost consciousness. Due to the fact that the car was too far from the road, none of the passing people noticed the bleeding woman.

It seemed that this was all, and for Shannon this day would be the last. But soon the woman woke up, and the first thing she saw was a huge dog.

When she regained consciousness, she thought that she would die, until she realized that there was someone else next to her … Shannon didn’t have time to panic when the dog, whom she later named Hero, began to lick her face.

But the story doesn’t end there. After the Hero licked all the blood from Shannon’s face, he began to drag her towards the road. The dog carefully dragged her about 40 meters until she was next to the road so that passing cars could see her.

Thanks to the fact that Hero dragged Shannon to the road, people passing nearby noticed her and took her to the hospital. It turned out that Hero was a stray dog, but after this heroic act, he ended up in the Humane Society animal shelter. In this shelter, Heidi Ridgedy trains dogs to search and rescue people – she then took the Hero to her home.

“He saved my life without any special training. Just think how many lives he can save with rescue dog training,” Shannon says, adding, “I told him he would always be my hero.”

Woman was bleeding on the side of the road. What this heroic dog did is unimaginable
Share on Facebook