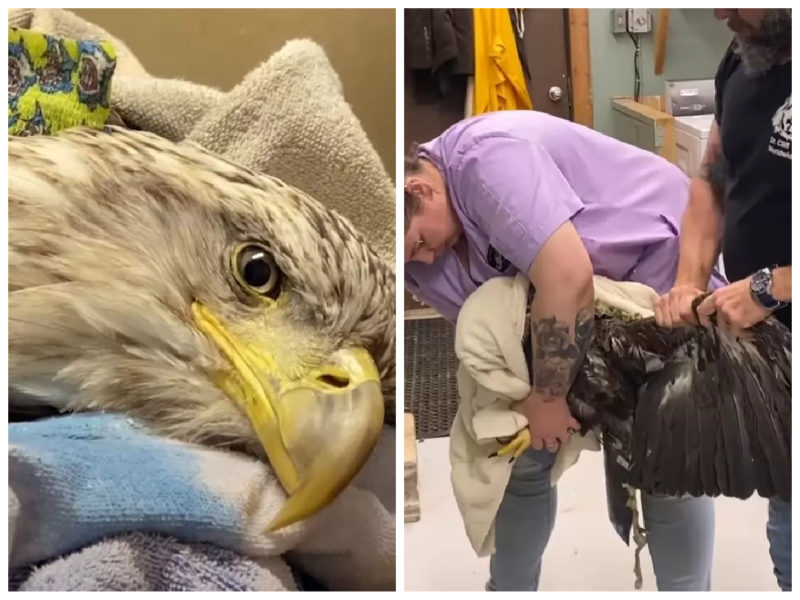 Many people are animal lovers. Of course, they are ready to rescue the wonderful creatures of nature, give them shelter and food but none of us can give them a second chance of living.

Only people with this profession are capable of saving them – they are vets. They are the true animal lovers ready to try the impossible only to help animals to recover. Such a passionate person is Dr. Cliff Redford – a vet in Ontario, Canada. This person has an unconditional love for wildlife.
The man keeps in touch with his fans on social media, sharing the processes of each injured animal that they are helping in getting better.

Lately, the man shared the story of a bald eagle injured as a result of duck hunters. It was badly injured and chances that the glorious bird would live were so small. The examinations showed that the bird was in a worse condition than the vet expected it to be. The eagle’s left wing bone was broken, and there were almost no chances that it could ever fly again.

But not in the case when Dr. Cliff Redford is the vet. The man was actually concerned not about the broken bone but the bird’s muscles.

Several hours of surgery gave the eagle named Wolf a chance to fly. The recovery process was the longest and toughest one both for the vets and the bird. After six weeks in rehabilitation, the bird made it! Thanks to the devoted vets and Wolf’s determination, the eagle can now fly again.

This story is fantastic. Both of the sides were firm enough in their purposes.

Injured by duck hunters, the bald eagle is learning how to fly again thanks to devoted vets
Share on Facebook

Rescued doggo with his little “backup dancer” made the cutest performance: they are so lovely to watch