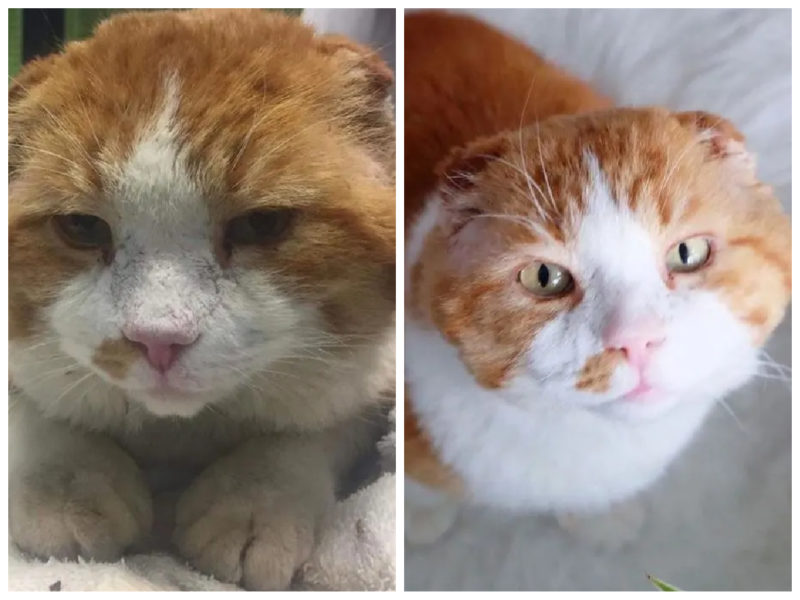 This cat once came to the threshold of the house and wept plaintively. A woman who lived nearby saw that the cat had no ears. Apparently, the cat walked, focusing only on the smell of food.

This woman’s name is Isabelle, she lives in Montreal, Canada. Isabelle was so worried about the cat that she could not leave him on the street without her attention. She realized that the purr needed to be urgently taken to the veterinary clinic.

A little later, the woman decided to look for information about this cat in social networks. And she managed to find out that this is a stray street cat that has been walking the streets for more than a year.

A veterinary examination showed that the cat was about seven years old, he had many parasites, scars, fleas and infection, problems with his teeth. The worst thing is that the cat was infected with the immunodeficiency virus. The vet prescribed a course of treatment that included antibiotics.

The cat was named Hansik. The shelter staff joke that the cat has probably already spent all nine lives, as a cat should. It took three months of treatment to get the cat on his feet. Now he is absolutely healthy! When he arrived at the orphanage, he was wary of people, but over time he became more outgoing and trusting. The cat turned out to be very affectionate and gentle.

Now the cat is in a temporary family for overexposure. He very quickly adapted to the new environment and always purrs when petted.

Cat sat on the threshold and asked for help; he hoped kind people would fed him
Share on Facebook

Sweet baby doesn’t want to punish her guilty dog that broke her plate, instead she hugs her