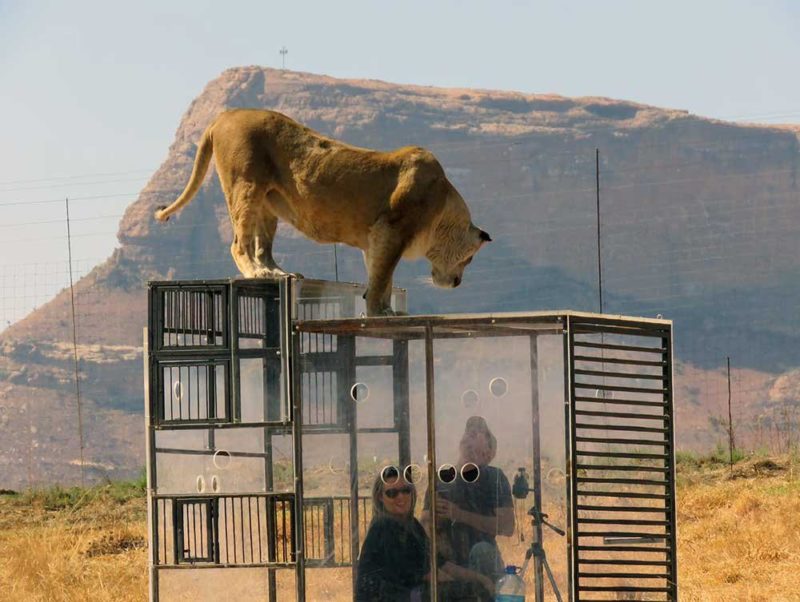 GG Conservation Lion Sanctuary in South Africa invites everyone to see the kings of the savanna from the closest possible distance and in complete safety.

For this, people are placed in metal and plexiglass cages located in the center of the lion’s pride. Any of the 77 inhabitants of the park can walk up to the “two-legged exhibits.”

The park, which spans nearly 1,000 hectares in the Harrismith City area, is privately owned by the Shannon family, who pride themselves on their mission to “love, protect and preserve the gorgeous lions that are under our care.”

The first lions in the collection appeared in 2002; in 2015 the company was registered as a non-profit environmental organization, and the attraction “people in a cage” has been offered to visitors for about two years. This is approximately $ 134-197. For this money, people will spend 45 minutes in a cage. The funds raised are directed to rescue lions around the planet in a difficult situation, and the park itself is funded by donations.

The cube can accommodate three people (the minimum age of the participant is 14 years). Engineers constantly check the strength of the rods and glass, and so far there has not been a single accident.

However, during the photo session, the staff is always on duty nearby. Visitors leave rave reviews: animals sometimes come close, trying to grab intruders, while the gap between the rods does not allow the predator to stick its paw.

In turn, this is also useful entertainment for lions: they get new impressions from exploring unfamiliar smells and observing non-threatening guests on their territory, which is always good for animals in captivity.

This is called enrichment of the environment.

Zoo the other way around: lions look at people in cages from the closest distance
Share on Facebook