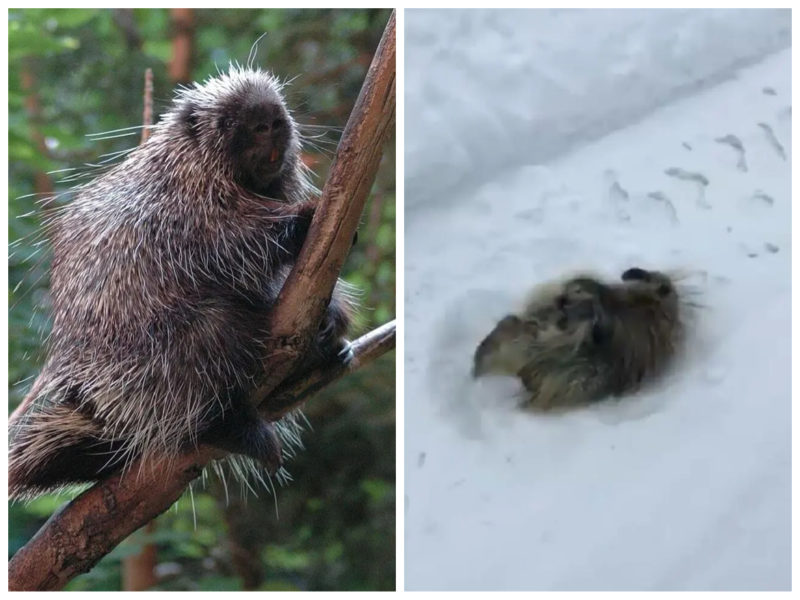 Raylene from Saskatchewan, Canada, was on her way home from work last week when she noticed a tangle of wool in the snow on the side of the road.

She decided to inspect the strange object, after which she made a startling discovery: a hungry porcupine was struggling to get out of the snow.

Realizing that the animal was in trouble, Raylene acted immediately. When Raylene got closer, she saw that the animal was lying on its back, literally nailed to the snow with its own needles.

In an interview with The Dodo, she said that the porcupine tried his best to help himself, but Raylene was afraid that he might not be able to get out of the snow trap on his own.

In the end, it became obvious that Raylene’s assumptions were correct, so she decided to help the poor fellow. She took out a small shovel and cautiously approached the porcupine. With the help of the tool, she was able to turn the animal on its stomach.

She then moved on to the next task, which was clearly more difficult for the porcupine without her help.

The animal wanted to cross the snowdrifts and return to the forest. However, since there was a lot of snow, he was unable to do so despite repeated attempts. Again, with the help of the snow shovel, Raylene cleared a path for the prickly creature, which eventually returned to the forest.

Share this article if you also think that even small acts of kindness can make a big difference to those for whom they are done. It’s always nice to help others, isn’t it?

Woman notices a furry creature by the side of the road, and when it starts to move, she decides to come closer
Share on Facebook