This huge turtle, which lives in one of the zoos in Thailand, after the operation she carried out, received a new nickname. Now the 25-year-old reptile is called Piggy Bank.

The zoo is located in the Chonburi province and is visited by a huge number of tourists every day. There are not so many green sea turtles left on our planet and they are considered an endangered species. 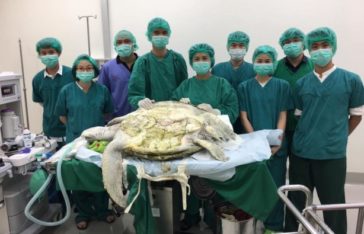 Zoo staff noticed that the turtle has been behaving strangely lately and swam, bent over to its right side.

It was decided to examine the reptile and have it X-rayed. Seeing the picture, the veterinarians were horrified – the turtle’s stomach was filled with round and flat foreign bodies. 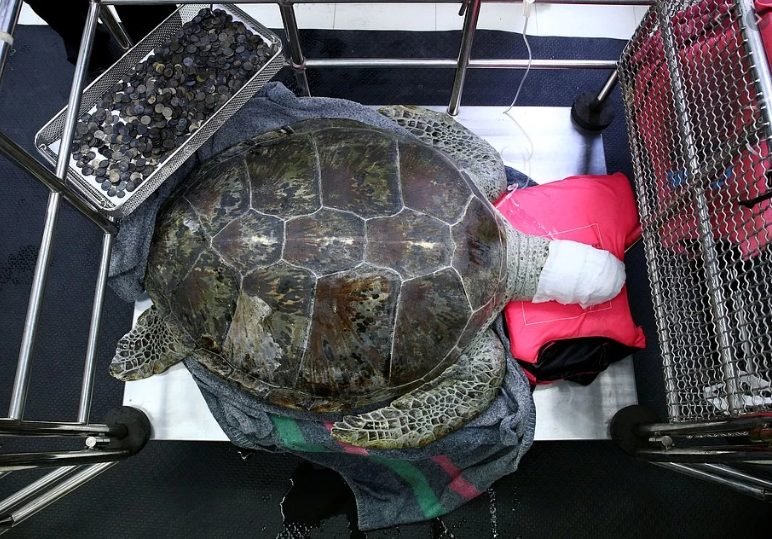 It was decided to operate on the turtle and remove the objects from its stomach. For this, specialists from Chulalongkorn University (Bangkok) came to the zoo.

The operation lasted 7 hours and as a result, two fish hooks and 915 metal coins with a total weight of 5 kilograms were removed from the reptile! This is despite the fact that the turtle itself weighed almost 60 kilograms at that time.

After the operation, Omsin feels well and is on the mend. According to veterinarians, it will take her 1 month to fully recover, after which she will undergo physical therapy.