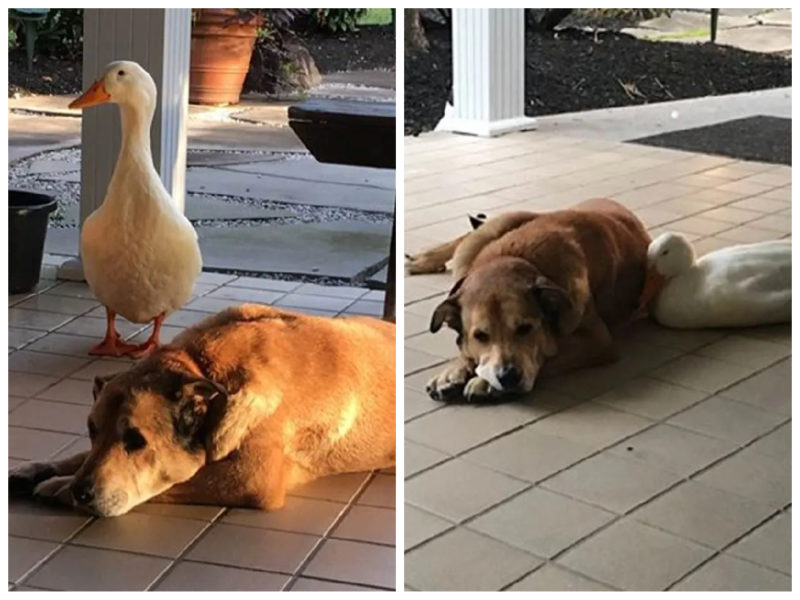 Dog George survived a terrible tragedy – the death of his girlfriend, a Labrador named Blackie. Several years have passed since the death of his dog playmate but the poor dog is completely wilted …

The dog was in a real depression. Each of his days was similar to the previous one: the animal lay indifferently on its bedding and did not react to anything.

George began to eat very little because of the melancholy that tormented him, and the owners were seriously worried about the health of the pet. George, as usual, indulged in sad dog thoughts, lying on the porch of the house. This day would have gone like that, but … the appearance of a strange duck violated the calm and usual course of Thursday!

No one noticed where the feathered one came from. But the duck felt confident, even impudent. She waddled over to George and cuddled up to him tenderly.

The dog was dumbfounded by the impudence of the bird but did not push it away. On the contrary, for the first time in two years, he perked up a little. George’s owner was not familiar with this bird, so she found the situation very strange: the bird was absolutely not afraid of meeting with an unfamiliar dog, and George, in turn, did not attack the uninvited guest and did not tear out her feathers.

Why? There is no answer to this question.

Now you will be even more surprised when you find out that this mysterious stranger did not appear on an ordinary day, but … on the day of the anniversary of the death of Blacky the Labrador! Miracles, and nothing more. George’s owner, Jacqui Lytton, claims that there is some kind of mystical connection between her pet and the duck. Since the appearance of the guest, the dog has never cried.

Jacqui immediately made the decision to leave the new pet in the house – and she never regretted it. The duck turned out to be very quick-witted and followed George everywhere.

A week later, the dog changed noticeably: he became a playful, cheerful pet with an excellent appetite. Longing disappeared from his eyes – now forever!

This duck saved the dog from depression: you’ve never seen such a bond between two different species
Share on Facebook