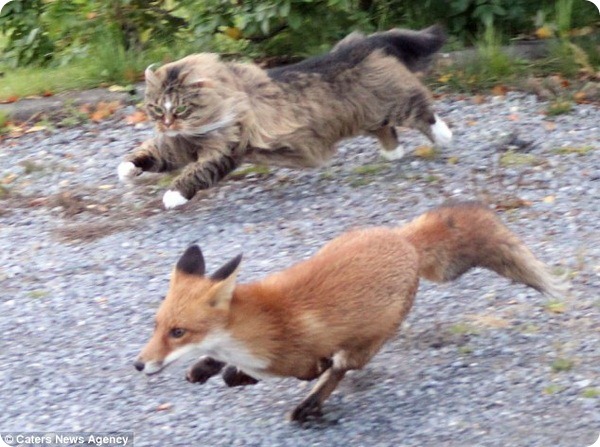 In fairy tales, a cat and a fox often sort things out. So this Norwegian forest cat, who lives with its owner in the city of Troms, in Northern Norway had a chance to deal with a fox that allowed itself to invade his domain.

These wonderful photographs were taken by his 48-year-old owner Evy Hind, who at the time was on the veranda of the house, quietly drinking her morning coffee.

The four-year-old cat named Leon was relaxing in the yard, not far from the veranda, when he noticed a fox approaching the house. “Foxes often come to our yard,” says Ms. Hind.

“They come here looking for food. And my cat Leon hates foxes. He is generally distinguished by an unrestrained disposition and does not like strangers – whoever they are.” 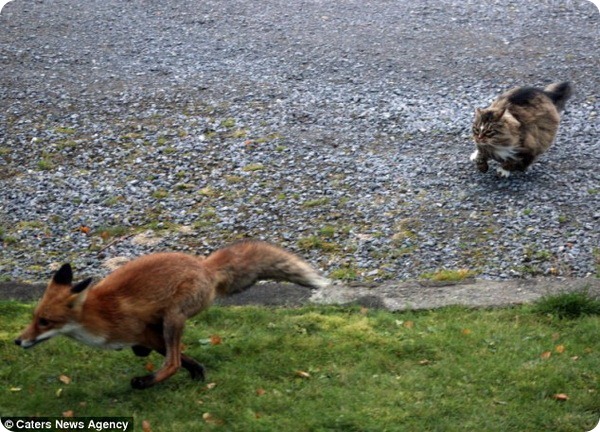 “When he saw the intruder, he instantly turned from an ordinary cat into a formidable lion,” the woman says. It was only necessary to see how brave he became. It is clear that the fox was not in the mood for an unpleasant encounter and quickly ran away.

Not a cat – but a real lion! It is clear that the fox, having seen him, decided not to mess with him, otherwise who knows how it would have ended … 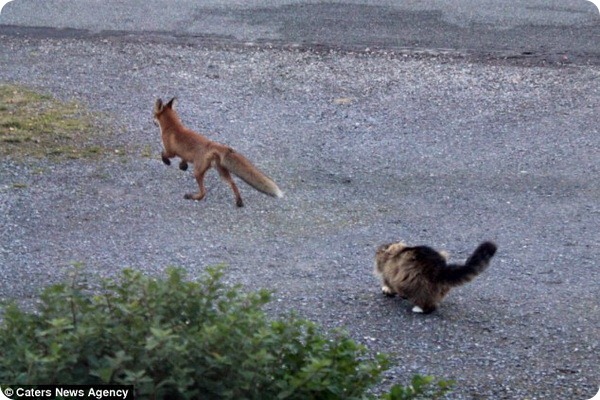 “The most interesting thing is that the fox was somewhat larger than my Leon, but did not get involved with him, realizing that it was better to stay away from him. So my quiet morning ended with a super adventure!”

Leon is a Norwegian forest cat with a freedom-loving disposition and self-esteem. But, despite his freedom-loving nature, he loves me very much and spends most of his time next to me.

The brave cat Leon drove the fox out of his yard, showing his feline nature
Share on Facebook