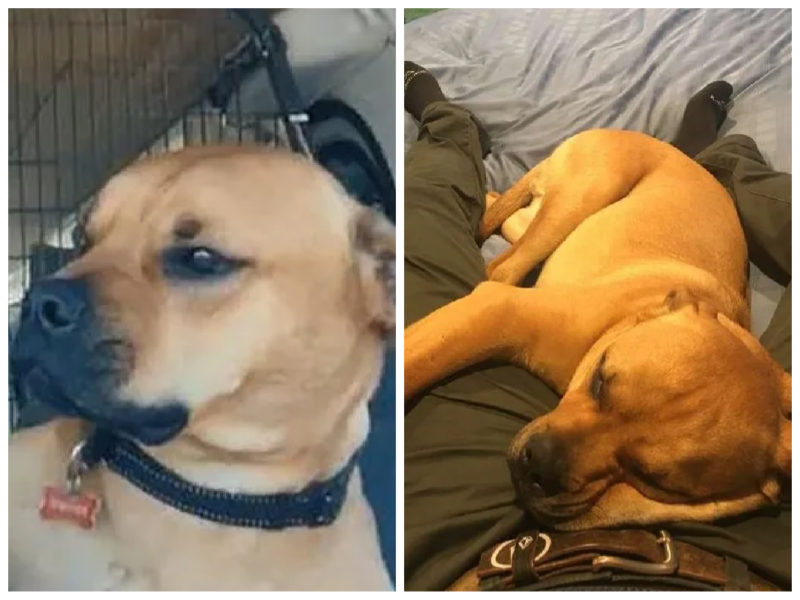 Taking a shelter dog to his new home is nothing but a very special and heartwarming moment. Dogs usually wag their tales and smile back to the person that decided to give them a forever home.

In this story, a dog named Stanley was 6 months old when he was found in an abandoned with his mother. Already in a shelter, he was living in better conditions but still, the pup needed special attention.

The shelter called Sam Clarence who is a volunteer dog walker to foster the pup for a couple of weeks. Sam agreed and headed to Bull Breed Rescue where he met Stanley.

The dog got excited to see Sam looking at him. At that moment he understood that Sam is his forever owner.

On the way home, the pup kept his paw on Sam’s arm to make sure he is beside him. When the man was trying to take the pup out of the car and take it home, the latter refused. He was afraid of being taken to another place. Sam spent 1 hour convincing the pup to enter his house. Finally, when Stanley was home, he was fed, took a bath and felt loved. But even while sleeping he had to make sure that his owner was near him. Still, every time this puppy sleeps, he needs to put his paw on Sam. He adores his father and that is why the man decided to adopt the affectionate pup.

Rescue dog keeps his paw firmly on his new dad’s arm on his way home, refuses to let go
Share on Facebook