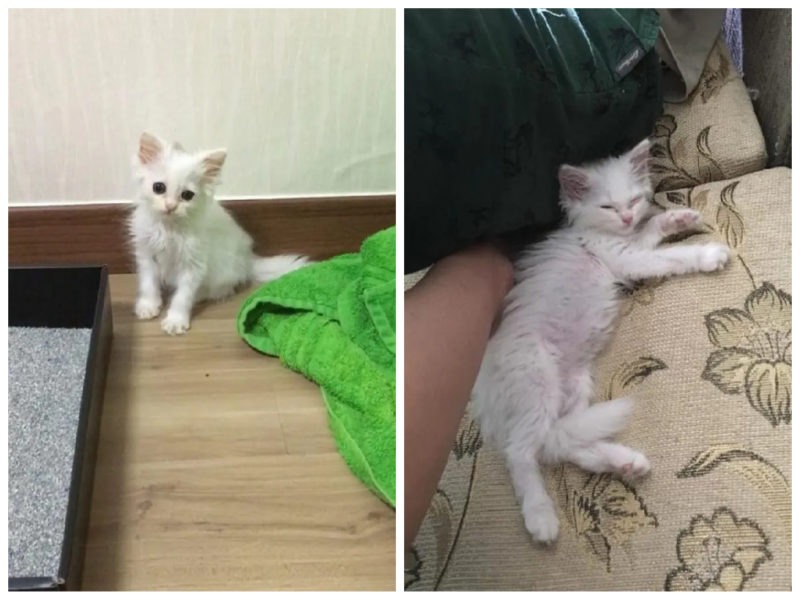 A man came to the pet store for food for his cat, while he was choosing the product he needed, he drew attention to one of the shop windows. There, behind the glass, lived a small white kitten. But he was in a very deplorable state.

The pet store employees didn’t pay any attention to him. They did not even notice that the kitten did not move at all and almost did not breathe. Near him, dry food was scattered on the floor, but there was absolutely no water in the cage. Also, the kitten had already begun to have an eye infection, and his general condition was simply terrible. The man drew the attention of the store employees to the fact that they were literally killing the animal, but they simply brushed him off and continued to go about their business.

Then he realized that the only way to save the kitten was to buy it and take it away from these hellish conditions. And so he did. After the purchase, the man immediately took the kitten to the veterinary clinic, where he had to spend his first night in freedom.

The doctors managed to put the kitten “on its feet” and he quickly began to recover. Now the kitten lives in a new house with the new owner, his health is in perfect order and he is happy and cheerful. The only thing that overshadows his joy is that he cannot find a common language with his owner’s old cat.

But he is working on it and does not lose hope of making friends with his neighbor.

The sweet baby girl received a hearing aid to be able to hear her sister’s voice for the first time:
017

These adorable wild sand cats have been captured on camera for the first time, after being looked for about 4 years
017
Comments: 3
Add a comment Cancel reply
NEW ARTICLES

The sweet baby girl received a hearing aid to be able to hear her sister’s voice for the first time:
Interesting News
0 17

Man saved a kitten that was dying in a pet shop window. Now the kitten enjoys his life near the loving owner
Share on Facebook