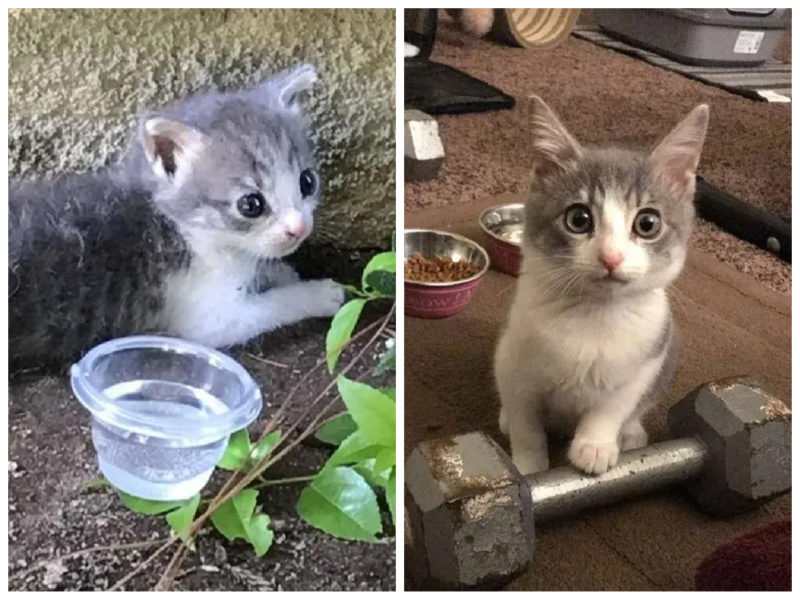 This story started about a year ago. A girl named Bree from California decided to make good use of her break from work. She had planned to go home quickly and have lunch, but her plans changed…

Near the house, Bree saw a strange ball of fur lying on the ground. The baby was barely breathing but still tried to squeak to get attention.

It turned out to be a girl. When Bree came closer to her, the little girl, began to crawl towards the stranger with her last strength… But only because of the forty-degree heat and severe dehydration, she was exhausted and was able to take only a couple of steps!

The girl looked around, hoping that the mother cat was wandering somewhere nearby. But she was nowhere to be seen – most likely, she abandoned her baby for some reason.

Bree could not leave the animal in the heat … She took her home, gave her water and food. The baby looked to be about three weeks old. Bree named the baby Chloe. The next day, she took the pet to the doctor for a checkup. The cat had a lot of fleas, worms and severe dehydration.

If the girl had not gone home at lunchtime and found the baby, she would no longer be alive!

The girl seriously thought about what to do with the cat next. For some reason, she considered herself not a very good housewife for a pet, so she doubted whether she could properly care for Chloe. And yet Bree decided to try. A month has passed. The kitty gained weight slowly for her age; she was too thin. But Chloe woke up an appetite, and she began to run after Bree and her boyfriend around the house.

The baby hates loneliness, so she tries to follow the owners everywhere.

Here is such a story! How did you meet your pet?

Kitten was lying in the heat, barely breathing … And a girl was walking by who couldn’t leave the animal to die
Share on Facebook