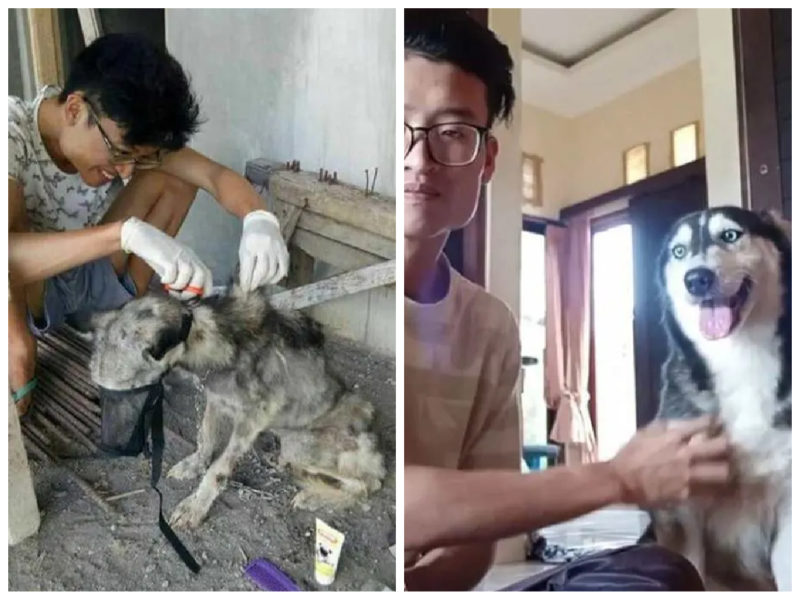 If you have ever been to Bali, you know how fabulously wonderful it is. But, unfortunately, a huge number of stray animals live here.

Luckily, some volunteers have taken this issue into their own hands, trying to give the unfortunate, abandoned dogs another chance.

One of these caring people is Rico Soegart from the city of Denpasar. Returning home from work one day, Rico witnessed a terrible picture: he saw a monstrously dystrophic husky, who was on the verge of death. Despite her extremely exhausted state, her bright blue eyes continued to shine, and Rico realized that he simply had to give the abandoned dog a second chance.

As 26-year-old Rico Soegart was walking home from work one evening, he met a half-dead pup with almost no hair. Hope, who looked more like a bag of bones, was frightened and extremely emaciated.

If Rico hadn’t taken care of Hope, she wouldn’t have lived even a couple of days. But, despite the deplorable state, hope flickered in her bright blue eyes. Rico instantly realized that he had to give the unfortunate animal a second chance.

“I don’t know what was special about her,” Rico says. “In my heart, something just skipped a beat. I met her when I was coming home from work, she was sitting in the middle of the road.”

After Hope got into a loving home, she slowly began to recover. She was carefully looked after and taken to the veterinarian several times. Rico is very proud of his newfound companion. Today, Hope is a strong and healthy husky girl with a thick coat and the same bright blue eyes.

The dog loves Rico, who rescued her. The guy says, “She loves to cuddle and eats a lot of cookies!”

Dog didn’t allow the ambulance to pass: when they tried to drive him away, he immediately returned