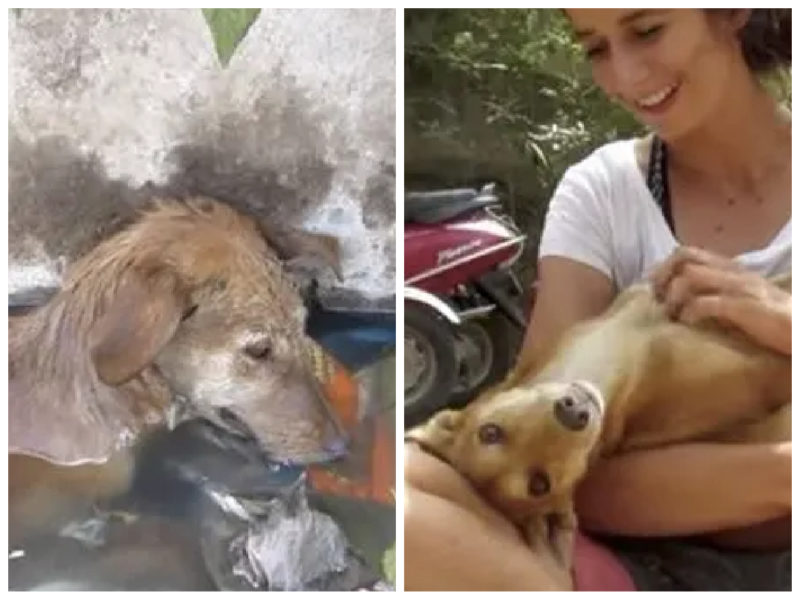 This unfortunate dog has suffered all her life…

She lived on the streets of a small town in India. The life of the pet was not much different from the existence of other homeless dogs and cats – she was always looking for food and lodging for the night.

But things got even worse when the poor thing broke her paw… Almost immediately after that, she accidentally slipped and fell into a ditch with dirty water. Her life was hanging by a thread…

There was a lot of garbage in the septic tank. The dog tried to get out of there, but every movement only dragged her into a quagmire.

After some time, the unfortunate animal sank almost completely – only the muzzle stuck out above the water. A couple more hours and the dog would have drowned!

Fortunately, caring people noticed the baby and reported her to the Animal Aid Unlimited society. Rescuers soon arrived at the scene.

The dog was pulled out of the ditch! People arrived just in time…

When the chilled dog was carried to the car, the rescuers saw that her paw was broken. The limb was already swollen – probably due to the fact that it had been in dirty water for a long time.

By the time the dog was taken to the vet, it was already too late. The doctor said that the paw should be amputated.

Due to weakness, the dog, which was given the nickname Phoenix, could die during the operation. It was decided to first give the baby medication, feed her and give her at least a couple of days to come to her senses.

Only two days later they began to prepare her for the operation.

The pet was weak and people were worried that she would not survive the surgery, but Phoenix surprised everyone!

The dog successfully survived the operation and began to recover quickly. She learned to walk on three legs – she did it cleverly!

Phoenix is ​​now completely healthy! She deftly moves on three legs and does not feel that she is somehow different from other dogs.

But most importantly, the joy of life returned to her again!

We hope that soon there Phoenix will find her family.

Her tears melted in the muddy water. A dog with a broken leg fell into the gutter but soon she got rescued
Share on Facebook

Employees of the company watched every day how their cat carried money, but could not understand where he got the cash from