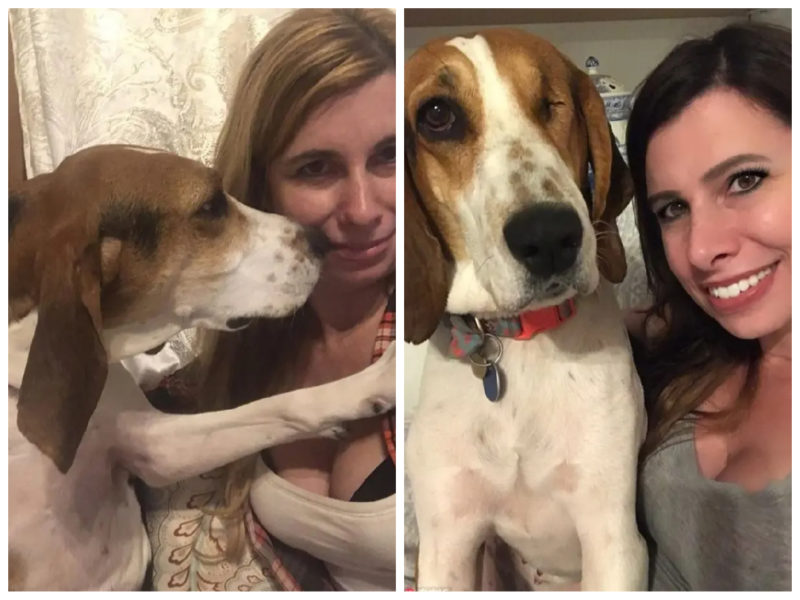 Every action has its consequences. But doing good, you never know how it will return to your life. This is the story of how caring about the fate of others saved a woman named Lauren Gauthier’s life.

Loren devotes a considerable part of her life to helping dogs that have been abandoned and suffered from human cruelty. The woman is a volunteer for Mission Beagle & Hound Rescue. If not for her, dozens of animals would simply have died. A Coonhound dog named Victoria is one of the woman’s wards. Lauren did everything so that the exhausted animal gained a second chance at a happy life. Of course, she could not even imagine where this would one day lead …

From the first meeting between Lauren and Victoria, an unusually strong, almost family bond was formed.

“She can sense when I’m upset or nervous,” Lauren says. But after a while, Lauren suddenly noticed that Victoria began to act strangely around her.

A small red spot appeared on the woman’s nose, which she mistook for a common pimple. However, Victoria constantly sniffed this place, and then Lauren became alert …

A tiny red spot, similar to simple inflammation, turned out to be a type of skin cancer. Fortunately, the timely visit to the clinic allowed Lauren to have the operation on time. It is terrible to imagine what consequences this tumor could lead to if Victoria had not discovered it.

“My dog’s persistence in sniffing a nose that has been stricken with cancer is truly amazing,” Lauren says.

“The operation changed my face, but if Victoria had not found cancer and I had ignored the stain, it would have led to even more physical damage. Dogs have a keen sense of smell, but I would never have thought that one day it would help me!” Lauren believes that in this way Victoria thanked her for saving her life and giving her a house.

Fortunately, today Lauren’s health is not in danger and she feels great.

This story will be a real lesson for those who think that dogs are devoid of feelings and are guided solely by instincts.

Dogs see right through us.

Dog kept sniffing her nose. The woman went to the doctor and … was stunned when she heard the terrible diagnosis
Share on Facebook