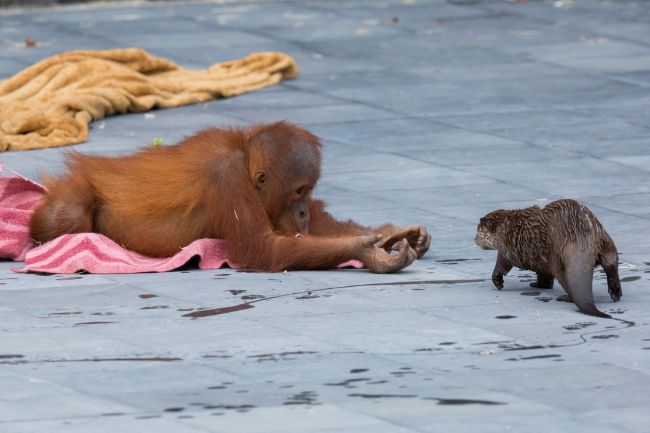 One of the employees of the zoo in Belgium published several photos, judging by which, a family of orangutans became friends with their neighbors, a large family of otters and live peacefully in the same enclosure.

For the full development of animals, the leadership of the Pairi Daiza zoo installed various training obstacles in the spacious monkey enclosure so that the animals have the opportunity for physical activity.

In addition, they led a deep stream through the entire enclosure, the source of which begins in the adjacent enclosure where otters live.

The zoo workers assumed two ways: if they made friends with neighbors, that would be great, and if the animals could not find a common language, then the otters would be able to pass through the dwelling of orangutans in a transit way. 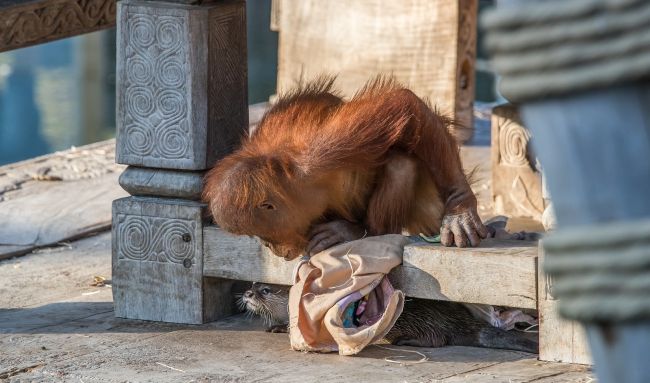 But no one expected that everything would turn out much better.

The monkey family liked the new neighborhood very much, and soon a real friendship struck up between the animals. They are having fun and it’s impossible to look at them without a smile.

Little Barney just loves to play hide and seek with otters. And dad Ujian takes up training otters. He lures them out during water bathing and invites them to compete in competitions that are understandable to him alone.

There is no aggression or conflict between the animals, they enjoy each other’s company and have fun.

The most expensive dog on earth! What a Tibetan Mastiff looks like